A very interesting end of the week on the precious metals market is behind us. In previous entries, I have repeatedly pointed out the situation in which gold will begin to show relative strength in relation to other assets, especially American indices. This situation looks like this, de facto, from a year, when the formation of an inverted head with arms on gold began to reach the S & P500, i.e. a system announcing increases.

If you look at the closing of the weekly candles, the current one is the highest of the overall rebound conducted since the beginning of the year. As you can also see, the ratio tests the breakout scenario with this close, both from the volatility threshold from the last 2-3 months (right shoulder), and also from the 2-year bearish line. What would a possible success in this place mean? If we look at analogous cases from this century, the end of the correction on this ratio went hand in hand with a clear, upward recovery in the dollar price of gold, and with it also silver, which can be seen in the chart below (these situations are marked with vertical, dashed lines).

New records for inflation in the US

The most interesting thing about Friday’s play is the conditions in which it took place. Investors were very impatiently awaiting CPI inflation data, which were scheduled for 14:30 GMT. They, to a large extent, depended on the further fate of the monetary policy created by the Fed, and thus whether the chances of easing the tone of the American monetary authorities would increase or decrease. While before the data there was still a scenario of a possible September pause (with a hike of 25bp instead of 50bp), after the May CPI reading at 8.6% YoY (new highs of the entire trend) the chances for such a softening in the fall are receding. . 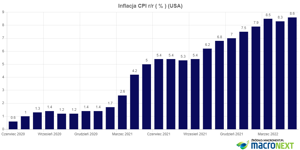 Of course, it may turn out that the next 3 readings (for June, July, August) will show some cooling or even stabilization, but it would be much better if Friday’s reading fell below the current peak of 8.5% in March.

The markets did not like the chances of a quick, dovish return by the Fed. Contracts for the US indices, debt market, eurodollar, Bitcoin, but also futures for gold and silver (which often takes place during a sudden jump in risk aversion) have started to sell. An hour after the data (opening of the US session), however, something rare happened, so gold and silver futures, without any major improvement in other assets, began to recover significantly. This can be seen quite well in the intraday chart below.

Many investors and market observers see precious metals as a panacea for the decline of faith in fiat currencies. And this Friday’s reaction fits exactly into this narrative when the gold and silver futures market broke away from the remaining “financial” assets after a few quarters of an hour and reacted in a manner suggesting concerns about the declining purchasing power of the dollar, not concerns about the consequences of a hawkish response from Fed sites. Such behavior of gold with rising bond yields, strengthening dollar and clearly declining US indices made many people stunned.

Therefore, it remains to be observed whether such situations will repeat themselves in the following days / weeks. The more often we witness them, the more it would suggest that a large-caliber capital transfer begins from traditional, overvalued assets, which are filled with, for example, classic 60/40 portfolios (Q2 is coming to an end soon and you will have to show clients the results from the broad stock market and bonds) to the precious metals sector. And as you know, nothing stimulates action as well as hard data (rates of return). If investors see better and better performance of gold against even the S & P500 (which is why we look at their ratio), over time they will inevitably start to connect to an asset that will be able to provide them with more satisfactory results.

The dollar again appears to be the most expensive in 20 years. Landscape in the markets after inflation data

Photoh defends the trend for the WSE: PEN by wizimir – TradingView

How did metals fare during real stock losses?

The importance of the inversion of the yield curve for gold

An opportunity to weigh silver against gold

The labor market is the main starting point