In the previous post, we looked at the June decisions of the most important central banks, but today it is also time to take a look at the domestic backyard, where there was no shortage of emotions. Like the vast majority of monetary authorities, the June meeting in Poland ended with a decision to raise interest rates. In our case it was 75bp, which drives the main rate to 6%.

The top panel of the chart above shows changes in the main foot over more than two decades. What is more interesting, however, is the bottom panel, i.e. the behavior of the real rate, i.e. the inflation-adjusted rate. Taking into account that the last reading of CPI inflation is 13.9%, the real rate in this situation is -7.9%, which, as you can see over time, means a record pace at which the zloty loses its purchasing power. And here is a curiosity, i.e. the correlation of gold expressed in PLN (right, inverted scale) with changes in the real rate.

The conclusion is that the ore has protected capital against systematically falling real rates, which over the past two years have fallen to more and more negative values.

Therefore, the question whether such strong, negative rates are likely to persist for a long time remains an open question. At the moment we know that there is no real chance of an interest rate approach to the inflation level, not to mention a real positive one. Although it would probably help in the fight against inflation, it would also seriously threaten economic growth.

The peak of inflation is still ahead of us

Recent statements of both MPC / NBP representatives, as well as domestic economists of the largest banks, show a consensus that the peak of inflation may, at best, shift to the fall. It would therefore mean that + 13.9% CPI still has a chance to be improved. This is the opinion of, for example, Ludwik Kotecki from the MPC, who in June statements for TVN24 estimated that inflation should stabilize in the second half of the year in the range of 14-16%, but at the beginning of 2023 it may … increase strongly, which would be related to gas price increases and electricity. 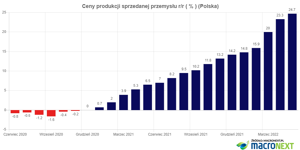 On the other hand, if we assume that PPI (producer) inflation is a leading indicator for CPI (consumer) inflation, the former is still growing dynamically and its reading in May is already 24.7%.

This is not the end of rate hikes

Therefore, this would lead to the conclusion that in such an environment, the 6% interest rate has a chance to go up further. Bank economists estimate at the end of this year the regions of 8-8.5%. Bank of America Global Research went even further, according to which rates in Poland will increase to 9-10%. On the other hand, at the conference after the last MPC meeting, more toning voices were voiced by the NBP governor, Adam Glapiński, who announced that the rate hikes cycle would be ended soon. At the same time, he did not specify at what level and when this end would fall out. It is also worth adding that the task of slowing down the pace of price growth is made difficult for the Council by the government, whose fiscal policy is not coordinated with the monetary one. While the MPC raises interest rates, the government keeps coming up with new ideas on how to ease the borrowers. In May, for example, the concept of “credit holidays” appeared. According to Citi Handlowy analysts, the resulting consumption impulse would be comparable to a 150bp rate cut. This lack of coordination is often compared to depressing the accelerator and brake pedals at the same time.

In a situation where inflation breaks away from interest rates so dynamically, it creates pressure on both the debt market and the currency. We felt little consolation in the fact that the inflation impulse is not only our country’s misfortune, but a global problem. While the increase in bond yields will not stop (investors are demanding higher interest on subsequent issues), it is a bit easier with the exchange rates.

The above graph shows the profitability of Polish 10-year bonds. When the problem of a sharp rise in inflation affects almost everyone, currencies primarily lose their purchasing power against goods and services that can be bought with less and less. However, they remain relatively stable towards each other. In our case, an additional problem is the conflict in Ukraine, which started at the end of February, and therefore global investment capital must now take an additional correction in terms of risk valuation.

Apart from the debt market, it is also visible in the currency market. Here, however, it is worth adding that the issue of the covid discount from two years ago, or the outbreak of the war beyond our eastern border, did not set the trend for the zloty, but only strengthened it. If we look above at the long-term graph of the zloty index, composed of the dollar, euro, franc and pound in equal weights, apart from the episode from 2004-2008, the zloty remains in a permanent downward trend against a basket of other major currencies.

On the other hand, if we look at the situation of individual pairs in a slightly shorter, medium-term horizon, this also does not fill zloty holders with optimism. 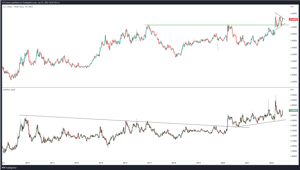 In the chart above, in the top panel, we have the dollar in relation to the zloty, which, after breaking the peaks from previous years in the area of ​​4.25, now formed a support from them. Above it, on the other hand, a triangle has been built over the past few months, with its continuing significance at this point, so it should be assumed that the chances still lie on the side of a further strengthening of the dollar against the zloty.

In turn, the bottom panel shows the euro in relation to the zloty, where the abrupt weakening of the domestic currency in 2020 broke the long-term bear line, and thus generated a signal constituting an invitation to higher levels. Although the trend for the euro has slightly different, more volatile characteristics, all the subsequent lows have been placed at ever higher levels since 2015, which in turn defines the direction applicable from the technical point of view. 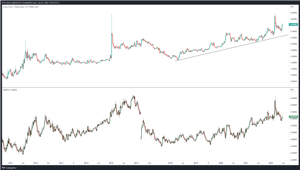 The situation with the Swiss franc is also very similar (the top panel of the chart above), which has also recently become a more volatile currency, but the long-term trend does not change within these fluctuations, which remains, of course, upward. The pound also belongs to the last few years, and it is laboriously making up for the losses it made on the wave of the Brexit passed in 2016. At the same time, it is relatively the weakest of the zloty pairs, but it has also remained in the trend for years, signaling the progressive weakening of the zloty.

Inflation, currencies and fuel = a recipe for an expensive vacation

Taking into account the statements of the monetary authorities themselves, inflation is unlikely to slow down in the near future. In turn, the possibilities of chasing it with radical interest rate hikes are also limited, if only because of its supply-related nature in many places, but above all, concerns about leading to a collapse in economic growth. Hence the conclusion that strongly negative real rates will stay with us for longer. This, in turn, would create a negative pressure on the PLN. 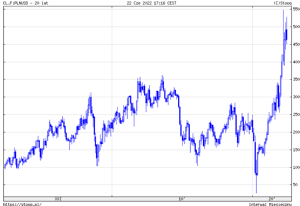 In addition to high prices of goods and services, as well as high exchange rates, we can also complete the holiday puzzle with fuel. Unfortunately, there is also no good news here. Although crude oil is still slightly below the 2008 record (USD 147 per barrel) at the USD price level, if we look at crude oil prices from the perspective of a much weaker zloty than in 2008, crude oil prices have exploded in recent quarters, as shown in the chart above.

Unfortunately, there are many indications that this year’s holiday, regardless of whether it is in the country or abroad, will be one of the most expensive in recent years and, apart from commemorative photos and nice memories, they will also leave behind “horror receipts”. Of course, a correction can always appear, especially on the most overheated assets (currently, for example, on construction materials after a radical reduction in creditworthiness on the real estate market), but remember that as soon as we see (especially in the US) “teeth” on inflation readings with the simultaneous strongly deteriorating data from the real economy, it will immediately be an argument for some softening of the hawkish rhetoric, and this will again bring back concerns about the return of further inflation tensions.

Market Refueling. What does turning off Iranian cameras mean?

Debt market implosion as a challenge for central banks