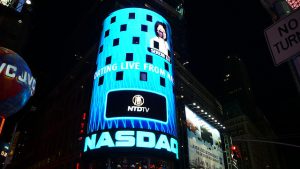 There is no doubt that at this point in time the vast majority of investors, other market participants, and also the public, expect the crisis to come. Yesterday such speculations were confirmed by Jerome Powell, the head of the Federal Reserve, who sees a high probability of such a problem.

In general, the crisis may also serve to limit price increases, although at the same time there is a risk of the so-called stagflation, i.e. a combination of high inflation and an economic slowdown or even a recession.

Powell reaffirms his final words about being fully inflation-ready today in the second day of the Congressional hearing. The Fed appears to be looking to raise rates sharply now to stifle a possible breakthrough in inflation expectations, even at the cost of a slowdown. The market interpreted this as a specter of an impending recession, which resulted in a further sell-off in many markets. Interestingly, Wall Street is doing quite well, although it is difficult to say at this point that there are only higher levels ahead of us.

In anticipation of a recession, we have always seen Wall Street fall during this period. The declines happened even before the crisis period, as was the case after the dot-com bubble burst, as the crisis came then only at the beginning of 2001. At the same time, however, Wall Street is looking for any positive news everywhere.

First, the Fed admits that there is a risk of a recession, but that is not the base-case scenario. Secondly, the market is pricing in that interest rate hikes would end this year. The latest comments from Fed members suggest a 75bp hike in July, followed by two 50bp hikes.

Some signs of recession are also visible in the commodity market, where oil, gas and wheat prices continue to sell off. Of course, these markets are very tight in terms of fundamentals, so it cannot be ruled out that we will see a return to growth, especially in the fuel market.

The above-mentioned situation on Wall Street is good from the perspective of today’s session. The S&P 500 gained over 0.7% in the first 2 trading hours. Nasdaq is higher by 1%. However, the situation in Europe is much worse. The DAX is losing 1.36%, while the WIG20 is pulled by state-owned companies by as much as 1.5%.

The hope for investors from Poland is the possible end of the rate hike cycle, which is suggested by the recent decisions of the Czech or Hungarian central bank. Of course, the current cycle will most likely end in the vicinity of 7-7.5%, which determines at least 2-4 hikes.

The exchange rate of the euro against the dollar is around USD 1.05090