At the end of May, we looked at the subject of a shift in US monetary policy, and more specifically the factors that could initiate such a shift. There can be many of them, from hard macro data (especially the labor market), through weakening inflationary pressure, to the election calendar (8 November Congressional elections). At that time, it could be assumed that if we see 3-4 consecutive readings of inflation, then around August / September it would be the perfect time for the Fed to say “pause” and thus initiate a dynamic recovery in the financial asset markets. The ruling government would then have a chance to enter the November elections with a slight correction of inflation and with good moods after several weeks of a solid recovery in the markets. By the way, these few weeks are not enough for inflation to take its toll again.

The shape of the above scenario was slightly thwarted by the May inflation data. Above the CPI index, where after a cosmetic retraction in April, May leaves a new maximum of 8.6%. After these data, the moods in the financial markets deteriorated again as investors realized that they were postponing the chances of a quick Fed pucker. However, some hopes can be placed on core inflation readings, where May turned out to be the second consecutive month of retraction (to 6%). 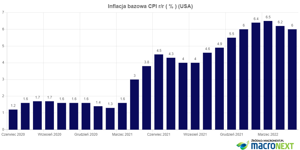 Correction on raw materials can help

The determination of the Fed in the fight against inflation resulting from the official narrative translates not only into the valuation of assets which, due to the weakening wealth effect (https://tavex.pl/efekt-bogzyst-w-walce-z-inflacja/), have a chance to cool down price increases in the real economy, but also translates into hawkish rhetoric fears of a recession, as evidenced by the breathlessness of commodity valuations in recent weeks.

Above is the chart of the CRB commodity index, where the last two weeks have left a noticeable retraction, the occurrence of which has already suggested a slowing down of the growth dynamics (a wedge in the chart). If the index were to go back even to its 2-year trend line as part of the current correction, it would mean the prospect of a 20% decline from the top. Therefore, to correct the CPI dynamics, as he found.

It is worth adding that 80% of CRB is allocated to the energy and agricultural raw materials sectors. And it is these segments that have been driving inflation the most in recent quarters. Above there is a chart of XLE ETFs (energy companies – lower chart) and DBA (agricultural commodities – upper chart). In the case of DBA, the past week ended with a break in the 2-year bull market, which would suggest the prospect of developing profit-taking.

The “doctor of copper” concerns about the economy

It is commonly believed that copper has a “PhD in economics”, so it best reflects whether we are facing economic growth, which will bring about inflationary pressure, or on the contrary. The chart above shows a strong increase in copper prices from the low in 2020, as the market was flooded with currencies. In turn, for a year the growth has stopped and we have observed a side trend, i.e. waiting for what will happen next. The recent rise in fears about the emergence of an economic slowdown goes hand in hand with the behavior of copper, which ended the week with a definite break from the current volatility threshold, in line with changes in the aforementioned energy sector or agricultural commodities.

We can supplement the chart of copper with its ratio to gold, which is also used as a barometer of inflation expectations. Here the local summit came at the end of October, and it just so happens that in November the Fed started to change its rhetoric to more and more hawkish. So if we see that the Copper / Gold Ratio starts to slow down and rebound upwards, the market may suggest the prospect of discounting the Fed’s pivot. By the way, I would like to point out the technical similarities with 2004-2005 (orange circles on the chart), i.e. the period of stabilization / retraction after breaking out of the several-year wedge.

If, on the other hand, we add 10-year US bond yields to the ratio of copper to gold, the correlation of turning points is obvious. This, in turn, may also suggest some correction in the debt market, which would also correspond to the prospect of a decline in inflationary tensions. There is also some technical space for such a correction (return movement) after breaking the long-term channel upwards.

Revision of inflation expectations in the University of Michigan report

On Friday, we got to know the final reading of the University of Michigan index. Preliminary data was released on June 10. The survey also includes inflation expectations, the change of which was referred to by Jerome Powell when making the decision to raise rates by 75bp in June. The long-term reading suggested 3.3% at the time, but was eventually revised to 3.1%.

While in the previous days another 75bp rate hike in July was practically certain, now the scenario of a 50bp rate hike is assigned a 27% chance, which slightly improved the market sentiment at the end of the week.

Although the record-breaking US CPI reading (8.6%) in May (8.6%) corrected market expectations regarding the rapid end of the current monetary policy tightening cycle, shifting them from autumn to the end of the year, there are many indications that the topic of cooling down inflation may still be in the near future return to the game due to concerns about the economic slowdown / recession (including the effect of the Fed’s hawkish policy), which are reflected in the behavior of commodity prices in recent weeks. Their correction could translate into a clove in the CPI readings for June and July, and if one actually appeared and was possibly confirmed by the August reading, the September Fed pivot would also come back into play. And with it a strong boost in risk appetite, ending a correction in the pro-inflationary assets sector.

The EUR / USD exchange rate remains below 1.06. Commodities are waiting for interest rate hikes in the US

How did metals fare during real stock losses?

The importance of the inversion of the yield curve for gold

An opportunity to weigh silver against gold

The labor market is the main starting point