At the end of July, the next edition of the quarterly report of the World Gold Council was published. As always, there is a lot of data on how the demand developed in different market segments and parts of the world, as well as how the supply developed. This is not a report for short-term timing investors, but may shed some light on the gold market’s long-term prospects. Below are some selected, more interesting fragments.

Weaker demand in Q2 from ETFs

Although the demand for gold weakened in the second quarter. However, thanks to the inflows to ETFs in the first quarter, the balance sheet of the entire first half of the year is marked by a significant recovery. The demand for gold (excluding OTC) was 8% lower y / y and amounted to 948 tons. Combined with the first quarter, this translates into an increase in demand in the first half of the year to 2,189 t, which means an increase by 12% y / y.

Demand for gold jewelry increased compared to Q2 2021, but was below typical pre-pandemic levels. It was 4% higher y / y and amounted to 453 tons. Growth in India and the Middle East has outstripped declines in China (lockdown) and Russia (conflict with Ukraine). In the longer term, demand remains moderate at 10% below the five-year quarterly average of 505 tonnes. In H1, demand (928 tonnes) fell by 2% compared to H1 last year, but was 12% below pre-2019 levels. 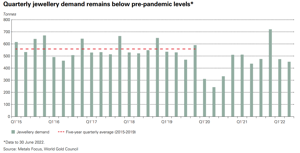 The authors of the report expect further weakening in China in the second half of the year despite potential seasonal rebounds quarter to quarter. A zero-COVID policy, weak domestic demand, and turmoil in the real estate sector may continue to negatively impact local economic growth and gold jewelry. Some relief, however, may come from stimulus measures, while the pent-up demand for weddings and the expansion of the 24K gold jewelry and Heritage Gold ranges may provide additional support if measures to contain the pandemic ultimately translate into success.

In India, the outlook for the rest of the year is mixed. While the demand for festivals and weddings is expected to be a positive factor in Q4, it will face the challenges of a depreciation of the rupee, higher inflation and a higher import duty on gold.

Jewelry demand in the Middle East has strengthened to pre-COVID average levels. Unlike Turkey, it remained subdued. Turkish jewelry consumption in the second quarter fell by 9% y / y to 7 tons. Demand has been remarkably stable over the past three quarters, but remains historically weak. The weakness of the currency contributed to the volatility of local gold prices and the fierce inflation that reduced disposable income. Markets in the Middle East recorded mainly y / y growth in Q2. Rising oil prices supported demand across the region, improving consumer sentiment and income levels.

US consumers continued to demonstrate their interest in gold jewelry, although dynamics may slow. Demand in the second quarter increased by 2% to 38 tonnes, well above the 33 tonnes of the five-year quarterly average. This resulted in an increase in demand in the first half of the year to 65 tons, at a level comparable to the first half of the year.

The demand for jewelery in Europe was the highest since Q2 2016 and amounted to 15 tons. The 14% y / y increase contributed to a similar (15%) increase in demand in the first half of the year to 26 tons, signaling a return to pre-pandemic levels. The increase was largely due to an increase in the number of weddings and a better economic scenario than in the second quarter of last year. However, the reported cooling in demand towards the end of the quarter, as the cost of living crisis began to deepen, suggests that dynamics may slow down in the second half.

Investment demand for gold declined in the second quarter. Total investments decreased by 28% y / y to the level of 206 tons. Lingering concerns about inflation supported the inflow of investment in gold, but the tightening of monetary policy and the strengthening dollar were probably the main drivers of the outflow. This pressure increased towards the end of the quarter as the US Fed adopted a more aggressive pace of monetary tightening and increased fears of a potential recession as commodity prices collapsed.

In the second quarter, gold-backed ETFs recorded an outflow of 39 tons, partially offsetting 273 tons in the first quarter. 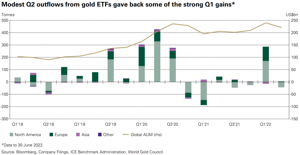 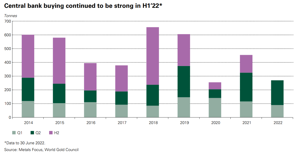 Turkey was the largest buyer in the first half of the year, increasing its gold reserves by 63 tons (32% of total reserves). Egypt was the second largest buyer in H1, posting an increase of 44 tonnes (+ 54%) in March. The country now has 125 tons of gold, or 21% of its total reserves. In June, the Central Bank of Iraq announced that it had purchased about 34 tons in a month. This is the first significant purchase since September 2018. He has raised his gold reserves to just over 130 tonnes. In the meantime, India continued to buy in the first six months and its gold reserves increased by 15 tonnes during this period. 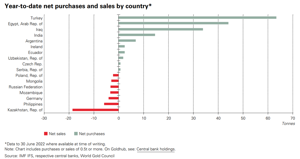 Demand for gold in LEDs has plummeted due to declining consumer electronics demand and continuous mini-LED penetration.

Memory sector saw a slight increase in gold demand again in Q2, suggesting that growth in demand in the sector may be stabilizing.

Demand in the wireless sector fell in the second quarter. This is a direct consequence of the declining demand for consumer electronics, which accounts for 70% of the entire wireless segment. The decline was compounded by the second quarter which was historically the weakest quarter of seasonal sales. A revival can be observed in the second half of the year, especially since the new devices are to appear in the third quarter.

Demand for printed circuit boards (PCBs) remained strong in the second quarter, with solid growth outside China. China accounts for half of the world’s PCB supplies, so local COVID blockades in the country had a disproportionate impact on supply during the quarter. Supply is likely to be limited in 2022, despite the additional capacity and declining demand for consumer electronics.

Which item seems the most interesting?

Taking into account the monetary situation around the world, the level of indebtedness and the ongoing struggle with the rapidly increasing inflation in recent quarters, what central banks do with gold seems to be of key importance. According to the World Gold Council report for the second quarter, central banks are still net buyers of gold. And this is probably the most valuable hint also for individual investors, especially those who treat their exposure to gold as a form of insurance for their investment portfolio in the event of large turbulence in the global financial system.

The dollar rises again for SAXO: USDPLN by Internetowykantor – TradingView