In August, two years have passed since the gold peak, set just below $ 2,100. During this time, the dollar price of gold entered a consolidation in which it is still moving. The sideways trend is limited at the bottom by $ 1,680. Considering the scale of typical adversities in this market, maintaining this consolidation can still be considered a success in making the bullion. What adversities are we talking about? First of all, the solidly rising dollar and rising US bond yields (see Chart below). While these still do not pay interest above the inflation rate, some capital decides to at least partially minimize its real losses and wait there for them.

The recent period of rising risk aversion in the markets goes hand in hand with the Fed’s still hawkish stance. During his recent speech at the symposium in Jackson Hole, Jerome Powell reiterated his desire to bring inflation down to the 2% target, even if it meant a more difficult period for the economy. So far, the market seems to be buying this hawkish narrative. Apparently, in terms of public sentiment related to declining economic growth and declining American purchasing power, it is not that bad yet to shift the narrative from “fighting inflation” to “fighting for jobs.” These, along with the weakening economy, will inevitably begin to melt, and when the average American feels it the hard way, there will be pressure on the rulers to tackle the problem of the weakening economy, regardless of inflation far above the target. And this will be the moment when the Fed signals a pause / turn in the current tightening cycle. 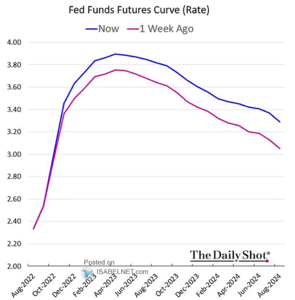 Above is a chart from last week’s The Daily Shot, which, based on the federal funds rate contracts, presents a valuation of the course of the behavior of the interest rate in the following quarters. Although the chart shows an increase in these expectations compared to the previous reading, we are more interested in the entire course of the valuation of interest rates. As you can see, regardless of where the peak would be in the current tightening cycle, in terms of timing, these are around the turn of Q1 and Q2 next year. It is worth bearing in mind that this may also be useful information for those investing in the precious metals market.

If we look at the past 20 years, as the US interest rate cycle was coming to an end, the gold market was already starting to price it in. This is because he discounted the transition to a new monetary easing. In the chart above, the top panel shows the gold price, while the bottom panel shows the US interest rate. In 2000, the price of gold began to pick up just as rates actually began to decline. On the other hand, in the last two cases, gold began to show strength as soon as the rate hike ended, ie before the phase of their decline again. It can be assumed that it will be similar this time, especially since, unlike in the last 20 years, we are now struggling with high inflation. If the Fed communicated its willingness to “add gas” to the economy in such an environment, it would be tantamount to sending inflation to the next, higher levels, or at best maintaining the current, already hardly acceptable dynamics.

Unless something “bursts” earlier (serious collapse in the markets / especially debt /, strong deterioration in the labor market), this expected peak of interest rates in the spring of next year may already be discounted earlier by the metals market. This would mean that in the optimal scenario, gold several months in advance (end of the fourth quarter) will already begin to be strong, even if compared to the broad stock market. A leading indicator should also be an improvement in the performance of metal miners compared to spot prices.

Oil at $ 126. for TVC: USOIL by PoloSvierovsky – TradingView