On Friday, another monthly report on the American labor market was published. Why is the labor market data of particular interest to investors in financial markets, including precious metals? Because they are strongly taken into account by the Fed as regards further decisions on monetary policy. The better the data, the longer the Fed will have an argument to stay on the path of monetary tightening (interest rate hikes and asset sell-off), and thus it will continue to put pressure on rising risk aversion in the financial markets.

As I mentioned a month ago, the published data now needs to be corrected (https://tavex.pl/mocny-rynek-pracy-w-usa-czy-pudrowanie-rzeczywistosci/). All because of the methodology used to measure what is actually happening in the labor market. Let me remind you briefly that, apart from the unemployment rate, investors are closely following the change in employment in non-agricultural sectors. The July reading turned out to be shockingly good (an increase of 528,000), which encouraged many observers to take a closer look at this data.

As it turned out? Well, the data on the change of employment are based on jobs, not the number of people taking up (or losing) jobs. Therefore, if someone lost a full-time job (-1), and instead found three part-time jobs (+3), entrepreneurs will report two new jobs at the employment change level. And in fact, nothing changes, except for the deterioration of the quality of the workplace / displacement into small ones. The situation is definitely different in the study of households, which started to separate from each other in March.

Contents
1 What did the data for August show?
2 What conclusions from the published report?

What did the data for August show?

First, the most closely followed change in employment in non-agricultural sectors. After the July increase by 528 thousand (cosmetically revised to 526 thousand), this time 315 thousand new jobs were added to the jobs reported by entrepreneurs.

The gap between the business survey and the household survey has narrowed from 1.8 million (in July) to 1.6 million (in August) since March. However, it is still a strong warning that the data from the labor market should be approached with very limited confidence.

Moreover, the above chart seems to correspond well both with the information on mass layoffs (as well as their announcements) in the largest corporations in the USA, but also with the data collected by the layoffs.fyi website, which in the 2nd and the 3rd quarter show very strong growth in compared to the previous quarters. Growth approaching almost the covid readings from the second quarter of 2020.

When discussing data from the US labor market a month ago, I pointed to the widening discrepancy between the transition to full-time and part-time employment. These discrepancies are even greater in the August data. 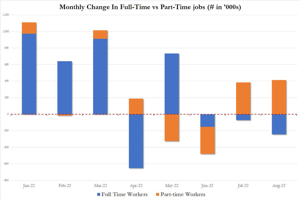 In August, 413 thousand were added. part-time jobs, while in the case of full-time jobs, we saw a decline by 242 thousand.

The unemployment rate also increased. It was expected to remain unchanged at 3.5%. In fact, it amounted to 3.7% in August.

Let us also take a look at the chart, which most eloquently shows the real condition of the American labor market, i.e. the next records of people working two full-time jobs.

Finally, an update of the chart of real, and therefore inflation-adjusted, wages. Although these cosmetically rebounded in relation to the previous reading, they still fit in the clearly negative series from recent months, naturally corresponding to the worsening sentiment. 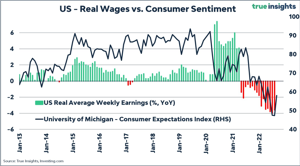 What conclusions from the published report?

If we are talking about a healthy, strong economy accompanied by a strong (employee) labor market, there is hardly a need to leave a stable, full-time job and replace it with several part-time jobs. And certainly a symptom of a strongly developing economy is not a situation in which the records of people forced to work two full-time jobs are broken. All this is amidst wage dynamics which is definitely not able to catch up with inflation.

In the investment context, and thus translating the situation on the American labor market into the Fed’s rhetoric, the key will be the moment when the society, experiencing real problems with finding a job, starts to put pressure on the rulers. Then the efforts of the Statistical Office (BLS), additionally exposed in the mainstream financial media, will have to give way to the cold calculation of electoral support (and redirect the conclusions from this calculation towards the Fed). And remember that in early November there are elections to the Congress (the so-called half-way) and the last thing Democrats would like to see would be a dynamic increase in the unemployment rate and social discontent.