Recent months have been marked by the rising dollar, which translates into the condition of many assets and, consequently, the global level of market sentiment. As a rule, the expensive dollar is not conducive to risky assets (emerging markets) or commodities. This also applies to metals. It is not, however, that in the environment of the rising dollar, gold and silver have no right to increase their valuation (expressed in dollar terms). This, however, is much more difficult than when the dollar is weakening against the basket of other major currencies. As a reminder, gold is most correlated not so much as with the dollar itself, but with the loss of its purchasing power, as shown in the long-term chart below. The orange line is the price of gold and the blue line is the dollar index (inverse scale) adjusted for inflation.

However, today’s entry is more about silver, and more specifically the consequences of the recent decline in the price of contracts below $ 20. The consequences that we looked at at the beginning of July (https://tavex.pl/srebro-ponizej-20-usd-problem-czy-wrecz-ponimnie/). 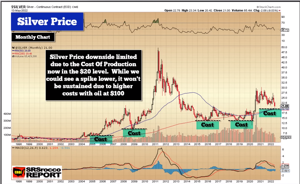 It is worth remembering that the global price increase observed in recent quarters concerns not only energy, but also labor costs (requests for increases), and this inevitably increases the operating costs of many companies. Including silver producers, where the average cost of extracting an ounce approached USD 20. This means that parts of the mine are no longer profitable to mine silver and it is cheaper for them to suspend their operations until the price returns to profitable levels for them. Such a suspension of production will naturally have its consequences in the decline in the supply of the metal, and thus the pressure on its price to return to higher levels. 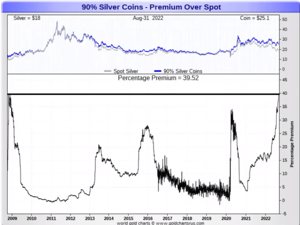 As it turns out, such a strong price pressure on the metals market, especially silver, has other consequences as well. As it inhibits the supply of producers, investors are forced to look for the metal where it is. Either they pay higher and higher margins (see chart above) with metal dealers (the so-called unsticking of the price of the physical metal from the paper price), or if they are large enough entities (primarily institutional investors), they can try to buy futures contracts requiring physical settlement. And this is what has been systematically happening since about 1.5 years, when the memorable “silver squeeze” took place. 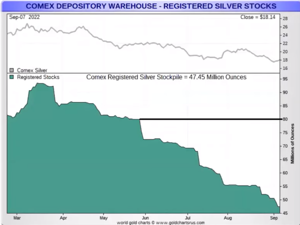 The two largest metal trading centers are New York and London. Above is the chart of COMEX’s New York silver inventory in Registered position, i.e. silver earmarked for spending (physical security of contracts). These have shrunk by half in recent months. Moreover, at the beginning of the silver squeeze, there was approximately 150 million ounces in this position (after being transferred from the LBMA vaults in London). As of September 9, the Registered position holds less than 46 million ounces. Thus, in about 1.5 years, New York’s stocks of silver as collateral for contracts shrank by 70%.

It turns out that not only New York’s COMEX has a problem with cleaning warehouses by investors looking for the ore. Recent months have also seen a marked decline in silver stocks in LBMA (London Bullion Market Association) vaults, which can be seen in the chart above (each bar represents one month). 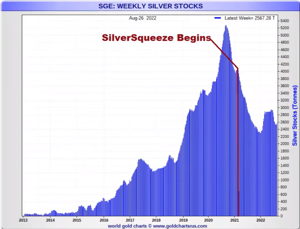 One can also mention the situation on the Shanghai stock exchange (see chart above), where the last two years have also been marked by shrinking silver stocks, the amount of which has dropped by about a half.

Keeping the price of silver below the cost of mining is usually the most comfortable situation for investors, and more precisely, a very optimal time to enter the market / increase the exposure. As a rule, this situation should not last long, because either the supply will soon be limited (production suspension), or it will cause serious disruptions in trading in futures contracts, where, as you can see, there is an increasingly long queue of people willing to physically settle the contract.

So if the stocks are not replenished quickly (there is no place where – the producers deliver silver to the vaults, and the production is no longer profitable), we can see the so-called the final “run” of physical silver. Investors, seeing how little is left in the vaults, will start to accelerate gold purchases even more. And it is precisely the failure of the “paper” metal trade in the fractional reserve system that counts both the eastern centers, which are based to a greater extent on the physical form, and the Moscow standard for precious metals, the so-called MWS (Moscow World Standard).