As we have emphasized many times, the level of dependence of financial markets on the Fed’s policy has been increasing in recent years. Hence, every nuance that could shed some light on future monetary policy decisions is immediately reflected in individual asset valuations and global investment sentiment. The Federal Reserve is currently watching two data areas with the greatest emphasis.

Contents
1 Rubber inflation target
2 Inflation difficult to tame
3 One can forget about the 50 bp rate hike
4 What does the above change in probabilities mean?

The first is naturally inflation, the target of which, let me remind you, is at the level of 2%. However, it is worth remembering what happened at the August 2020 meeting. The head of the Fed, Jerome Powell, announced then that he would change the definition of the inflation target from a fixed 2% to “2% on average”. It meant, therefore, that inflation was entitled to deviate from this “average” target. How much and for how long? Not reported. It could therefore suggest that even then the Fed might have been aware of what would happen with inflation in the coming quarters, and thus was preparing a favorable ground for future events. He probably only underestimated the scale of this deviation.

The second area monitored by the Federal Reserve is the labor market, which we have looked at several times recently, paying attention primarily to the warning aspects that the mainstream financial media are not in the habit of looking at. For details, I refer to the entry from the end of last week => https://tavex.pl/amerykieta-pracuja-coraz-wiecej-za-coraz- less/

The event of yesterday, which will probably also weigh on the sentiment and the balance sheet for the whole week, are the August data on inflation in the US. So data that may play a key role in what the Fed will do at its meeting next week (21/09). What did investors learn?

Well, the dynamics of CPI inflation is falling for the second consecutive month. Its peak so far has fallen in June (9.1%), only to go back to 8.5% in July, and further to 8.3% in August. However, expectations before yesterday’s publication were at 8.1%, and the market reaction more often is the result of not so much the direction of the change itself, but its juxtaposition with forecasts. So the market was disappointed. 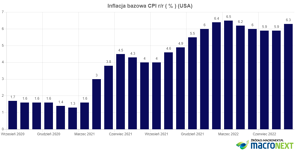 An even greater problem is core CPI inflation, an indicator that does not take into account changes in food and energy prices. In this case, a slight upward move was expected to 6.1% from 5.9% in July. In fact, core inflation rose to 6.3% in August, blurring the correction built in the four previous months.

One can forget about the 50 bp rate hike

Why did yesterday’s inflation readings spoil the sentiment in the market so much (strengthening of the dollar, declines in equity and debt markets, withdrawal of commodities)? Because they appear a week before the Fed’s meeting and will probably affect whether Jerome Powell will maintain his hawkish rhetoric. Before yesterday’s publication, the market with high probability (approx. 80-85%) priced in the rate hike at the September meeting by 75 bp (i.e. to the range of 3.00-3.25%), leaving itself a 15-20% chance that it will be only 50 bp. Now the situation is changing a lot. 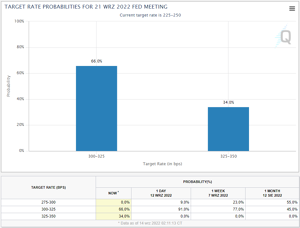 At the moment, the chance for an interest rate hike by 75 bp is around 66%. The option of a 50 bp rate hike is no longer considered, while 34% falls in a scenario where rates could be raised by 100 bp, ie to the range of 3.25-3.50%. In practice, this also means a 100% chance of a 75bp rate hike (investors pricing a 100bp rate hike by Fed Fund Futures also necessarily price everything that is below this value).

What does the above change in probabilities mean?

Although the scenario of a rate hike by 75 bp next week is still the most probable, the published inflation data mean that it is becoming more difficult to expect any dovish element at the conference, e.g. a suggestion of a reduction in rate hikes at the next meetings (the next one will take place on November 2). or departing from the increase in the dynamics of the reduction of the balance sheet total to USD 95 billion per month, planned for September.

Due to yesterday’s data, the light in the tunnel in terms of signs of easing the hawkish so far rhetoric of the Fed is disappearing from view again. Now those who look for it can count on “help” from the labor market data, and thus the deteriorating situation in it will also break through to the data monitored more closely by the Fed, i.e. a further increase in the unemployment rate and applications for benefits, or a breakdown in employment changes, which would allow put forward problems in the labor market even before inflation.

US Inflation Dealt Another Blow to the Technology Sector