Earlier this week, we looked at the behavior of the silver stocks available for release as collateral for futures (if physical settlement is requested). Whoever missed this thread, I refer here => https://tavex.pl/comex-pod-sciana-run-na-fizyczne-srebro-coraz-blizej/ Both New York’s COMEX and London’s LBMA have suffered from the outflow of physical ore in recent months, but also the market in Shanghai. As we know, the situation is also not made easier by the falling dollar valuations of metals, which in the case of silver were below the cost of mining. Therefore, miners have limited possibilities to replenish the recently drained vaults. And if so, the line of people willing to settle accounts with physical ore is getting longer and longer.

As a supplement to the issue of inventories, I propose today to update the COT (Commitments of Traders) weekly report, from which there are also more and more interesting conclusions. Let me remind you that the report appears every Friday after the end of the trade and presents the positioning of individual groups of contract market participants for Tuesday. So it is always delayed by 3 session days. In the case of precious metals, we are primarily interested in bullion banks, and therefore the main supply force in the derivatives market. In the COT report, we also have access to information on the positioning of producers who use the futures market to hedge the prices of extracted metals. As producers are considered to be the best informed group, changes in their set-up (reducing / increasing security) are also valuable information.

So let’s first look at what is currently happening in terms of positioning in the gold market. In the above graph, we are interested in the bottom panel, with the green and red lines in it. The green is for the net positioning of the swap dealers, and the red is for the producers. As you can see, producers are systematically leaving short net positions from the covid low of 2020. Until recently, it was much worse for bullion banks, while since the turn of March and April, this group of market participants also significantly reduces their net short exposure. In the middle panel of the chart above, we find aggregated data, where producers and bullion banks are included together under Commercials. It is also clearly visible here how the net short exposure has been reduced in recent months. Closing short positions (consisting in buying) is of course facilitated by the falling price of contracts. This reduction in net short exposure drives positioning to levels we saw the last time in early 2019, when the last major uptrend in the gold market began. 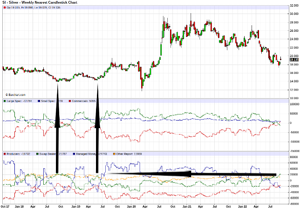 Even “stronger” conclusions can be drawn from the COT report on the silver market. In this case, the bullion banks (bottom panel, green line) not only managed to reduce their net short exposure in recent months, but also to go into net long and systematically increase this position (currently it is almost 22,000 contracts). The last time this happened around May 2019 and August 2018. In both cases, they were market lows. Silver producers also reduce their collateral, which together with bullion banks in the Commercials position currently have a net long exposure. 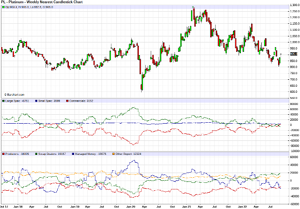 Due to the fact that in the previous weeks we also looked at the market prospects for platinum (the cheapest of the noble group), the chart above is positioning on contracts for this metal. Here, the conclusions are very similar to those for silver, so also Swap Dealers found themselves after the last reduction of shorts in the net long area. We will also see a significantly reduced hedge against price drops in the case of platinum producers. 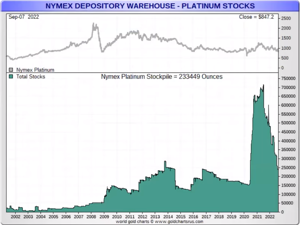 Referring to the entry on the declining silver stocks, which is a security for contracts, I suggest looking at the platinum listed on NYMEX in this respect. Here, too, the last months are marked by a very dynamic loss of metal, after its significant replenishment in 2020. In conjunction with a very favorable positioning report, we also receive positive information from this site.

The reduction of net short exposure visible in recent months by the main supply force in the precious metal contracts market, i.e. bullion banks, is, in combination with the shrinking metal inventories in COMEX, LBMA or NYMEX vaults, a very positive outlook. Of course, it is not a guarantee of an immediate trough, but being aware that the most important entities on the derivatives market are no longer interested in continuing the decline in prices, and the physical metal is systematically disappearing from the market, the potential for further significant discount seems to be limited. And if such a problem occurs for liquidity reasons (a market crash), precious metals will be a group of assets that investors with a cash position during such market panic will reach for in the first place.