I believe that the text of this article will not be easy for the brain to understand in a “relaxed” state, so I urge you to strain it a little.

To make investment decisions, many traders need an explanation of certain events, or rather the reasons for these events (relationships), which is what our conscientious analysts use, “explaining” what, what for and why…

– Why did the price of gasoline rise when oil prices dropped enormously?
– Because we started to incur losses in the foreign market and decided to compensate them in the domestic market.
– OK. But why, when oil began to recover, gasoline continued to rise in price?
– Well, how? Oil rises in price and gasoline rises in price …

Truly the most stable trend is gasoline prices in Russia. But if you thought that such a comic example is one of a kind, then you are MUCH mistaken. Of course, each event has its own reasons, but more often than not they are hidden more deeply than it seems to our mind, which loves to simplify everything.

Before you are two equally accurate clocks – A and B… When the hands on the clock A show exactly noon, clock B start calling. Does it follow that the clock A caused the clock to chime B ?

The example is simple, and you have time to think and, I have no doubt, to give the correct answer to this question. And now let’s recall problem # 2 from the article about intuition in trading and the condition of some haste, in which it was solved … In an open market, there is not always time (and some have the desire) to think. For this reason, inexperienced traders tend to trust the conclusions of other people from various (not always qualitative) sources, without going into the details of such “theories”. I’m not only talking about services and individuals that offer some kind of “Signals” for opening positions, this also applies to analytical reports and unthinkable strategies that are teeming with the entire Internet.

Relationship of technical indicators with price

Any of the technical analysis indicators shows only a certain number calculated from past price readings, but does not predict their future behavior in any way. 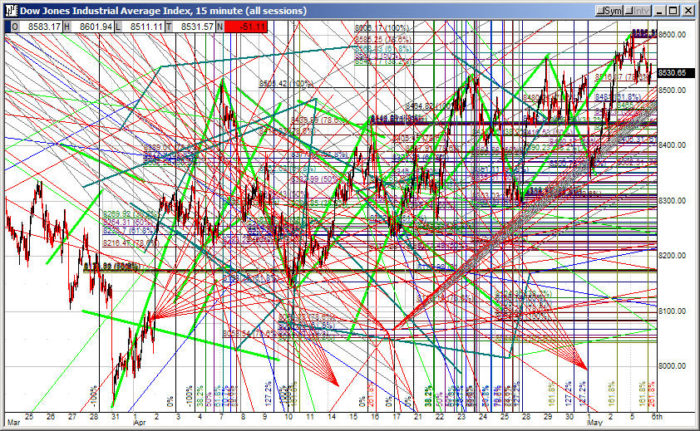 Let’s take a frank look at the paradoxical nature of the fact that even after reading this article, there will still be people who will be guided by indicators in their trading and test all new hypotheses never seen before. I suppose this is not because the lines of this text were subjected to some doubts (it would be surprising), but because a person wants to plunge into the world of finance, but apart from the unfortunate indicators he can find nothing.

So it makes sense to figure out what follows what, and at what stage trading turns into a “guessing game”.

One and the same event can be a Consequence of a previous event and a Cause of a future one. This chain is what we have to disassemble. And in order to build it as OBJECTIVELY as possible, let’s start from the very end:

Those. all you need to do to generate income is understand when the volume of Limit orders will cease to meet the volume of Market… And here the fun begins …

At first, the overwhelming majority of low-skilled traders paraphrase the above problem is disastrously incorrect: “when there will be more buyers of sellers”, “when they stop selling and start buying” and similar, similar in sounding, but far from the true reason for price changes, expressions. That already at the start leads to deliberately incorrect reasoning.
Secondly, the same category of traders believes that if, say, a double top is drawn on the chart, then all participants see it and react in the same way, and this is the reason for the price drop. Although if there are no buyers, then there will be no one to sell, and there will be no deals at all, and the price chart will remain in place.

Back to the chain of relationships …

Once again I draw your attention to the fact that the indicator draws its lines following the changed price, and not vice versa. While the price changes following the sending of orders, and not when news or something like that comes out. (It is important!)

How market participants will react to this or that news, the figure of those analyzes or any indicator, NOBODY KNOWS, just as NOBODY KNOWS what volume will take part in the auction. Therefore, in the entire chain above, and if we are talking about intraday trading, the most useful information for making a profit is provided only by an understanding of the order execution process (Market Structure). However, the further the investment horizon (holding a position) is, the less important is the knowledge of the structure, and the more difficult the trading process becomes in general.

And trading becomes more difficult, because with a long holding of a position, there is no OBJECTIVE data left for trading, and traders begin to look for imaginary relationships between assets, markets and even between the economic indicators of different countries, and at the same time they put forward various hypotheses on their impact on the price of some then a separate asset.

Of course, there will be those who like to argue and explain everything that happens in the market: they believe that since a company has increased the number of sales, the price of its shares must certainly rise; if a country’s GDP grows, then the country’s currency should also strengthen; and similar conclusions, causing blind confidence of inexperienced traders, can be listed, perhaps even endlessly. I have already examined the issue of the lack of relationship between GDP and the exchange rate in the article on Fundamental Analysis, and similar schemes can be used to trace the relationship (or rather their absence) between the number of sales and the price of shares, between the interest rate and stock indices, … yes, between everything … Even the shares of the same company listed on different exchanges correlate with each other only thanks to the arbtractors.

Of course not, no, but some particular event can influence, and does, affect the price of a particular asset, but this does not happen as often and is not as obvious as you might think. Information about such events is often classified as insider information, and this is understandable, otherwise if all bidders buy, then who will sell them?))

In order not to fall into the pit in which the fans of trading from the Internet find themselves, I would recommend refusing to reason and study articles on the reasons for some event there (this is absolutely not objective information).

Instead, study the Market Structure for intraday trading and the RATIO of assets (and not the assets themselves and news on them) and their metrics when trading over a longer period.

PS A large number of examples and discussions on the topic of relationships are presented in Darell Huff’s book “How to Lie with Statistics.”