Data Analysis | Where will the price go?

One way or another, a person in his daily activities is faced with the analysis of any data, and even more so when it comes to finance. But you can look at the same data from different angles. “How many people – so many opinions” – you can’t argue)) but today we will talk specifically about opposite conclusions based on the same initial data.

Where will the price “go”?

Is it right to ask this question?

– Huh. Denis, if I make money on the difference between buy and sell prices, then of course I need to know some information that will help me determine the direction of price movement.

Damn, everything is logical, what can you talk about at all? Yes, and a whole article to write on this topic))

And just at this point, before continuing the story, I would like to ask one question:

Imagine yourself as an engineer at a military aircraft factory. A ridged plane has just arrived from the sortie. Your task is to strengthen the structure of the aircraft, but you cannot reinforce the entire aircraft, as it will become heavier. So the question is: What places of the arrived aircraft will you strengthen?

You may have heard of Abraham Wald. This man faced the same question during World War II. So Wald decided not to strengthen the places with holes, but to strengthen the surviving places. in the end, the plane nevertheless flew in, therefore the important components are in those places that were not hit by the shells. 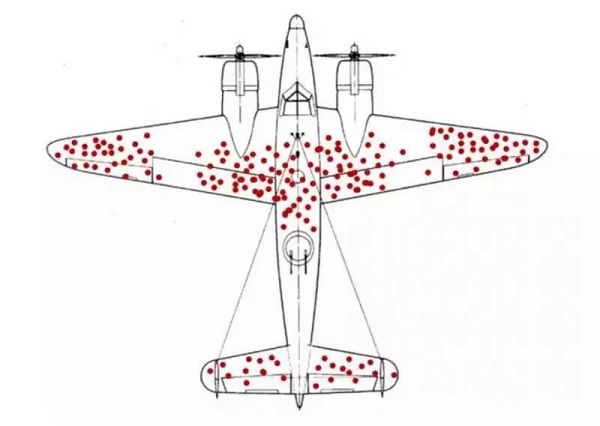 And in fact, the solution may not be as obvious as it seems at first glance. Well, now to our rams …

By analogy with the example set out above, you can solve the problem in trading. Namely, to focus not on where the price will go, but on where will she NOT go…

To begin with, the price can not only rise or fall, but also stand still. And if a trader determines the direction, as a rule, he thinks about the fact that the price can stand still, and often it comes to mind just when the pose has been open for some time, and the nerves begin to play pranks and ask to close, because there is less and less confidence that the direction is correct. If you have any experience in trading, remember how many times you closed a position without waiting for development?

So, when we ask the question “Where will the price NOT go?”, We kind of mean that it can stand and go in the opposite direction. This makes the attitude towards protracted “downtime” more loyal.

Such reasoning may seem somewhat incomprehensible and not familiar if you did not approach them from this side. But we are still on the surface …

Can you be sure of something?

“What is not prohibited is allowed” – something like this looks like a simplified interpretation of legal documents.

Well, this is brilliant! Focusing on what cannot be done is much easier than trying to conclude without this knowledge whether you will be held responsible for any action.

Let’s compare this example with financial activity … It is impossible not to agree that nobody knows what will happen the next secondhowever, there must be a clear understanding that some actions can aggravate the initial state of affairs.

The price will never rise if it faces a sell order with an “infinite” volume. (See the article Market structure) So what’s the point of clinging to information about “what a good company”, “what a great growth potential it has”, that “new management will increase profits” if in fact the demand for shares is multiples of the supply? At least while this is the case, you cannot buy shares of this company.

Returning to the answer to the question, you cannot be sure that the stock price from the example above will fall and you will be able to make money on this fall, but I would argue that if you buy them, you will get a bunch of unnecessary problems.

Answering different questions, the trader focuses on different information. More precisely, by not asking the right question, he is missing out on the right data.

“How to determine …”, “how to guess …”, “how to predict …” – Are you sure you are asking the right questions to search engines?

The sad thing is that the Internet community generates answers precisely based on user requests (as they say – Demand creates supply). And given the fact that most novice traders are asking the wrong questions, we see such an abundance of useless (and in some cases dangerous) information on the web.

Of course, you can convince yourself that there are people who know what others do not know. And this is true … After all, “others” ask different questions. But it cannot be argued that these people have limited access to all the necessary data, they just, for some reason, ignore some of them … A critical part. And in their arguments they stop at the desire to make money, and not the desire to protect their capital.